Ok, so I have been a lousy blogger this week. It may sound like an excuse, but I’ve been very busy!

This week, I was partnered with Justin, a young man just completing his BA in Education at Michigan State. We were assigned to teach 6th grade for four days. Yes, that is four days with pre-adolescent kids. Surprisingly, several of the days were actually quite productive. We found some strategies for getting them to pay attention, and I believe we actually had some impact on their learning. Of course, there are those couple of students who are just not tuned in … ever. In this class, there were a couple of boys in particular who just wouldn’t engage. If you spoke with them directly, they parroted you, but they never actually followed the instructions or were able to do the task you were asking them to do.

On the bright side, there were several kids who really wanted to learn. In fact, one boy asked to change seats because he couldn’t hear well enough. He preferred to sit with the girls than to go without being able to actually learn something. Impressive! 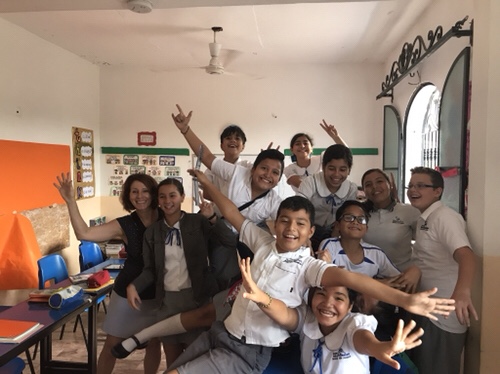 I found it easier to develop rapport with some of the girls. I dress a little better when we have to teach, which means jewelry and make up and all that. The girls always notice my jewelry, so I try to wear something different each time. They also like that I can be a bit silly. This week I made funny faces to help them understand the word “silly,” and I also danced with them to Uptown Funk (Bruno Mars). They loved that.

One of the boys, Daniel, also decided I wasn’t so bad. He made me a paper airplane. While he was very disruptive in that he required a lot of attention, he was better than some. The ones that were more difficult for me were the ones that were playing with matchbox cars or doing their other class assignments.

Justin is an amazing teacher. He has the right attitude and the skills to make it work. I really loved working with him. I felt that he carried most of the class. I tend to improvise more than I should, which, apparently, isn’t a good strategy. Hopefully I will get better at following my own lesson plans. With his degree in teaching, I suspect he will soon become a superstar somewhere. I hope he will stay in touch so I can follow his progress.

Week three is now behind us. Lyn and I have just one more week to go before we head home to close on our house and figure out how to get our dogs and possessions back to wherever it is we are going to be living.

It is a bit nerve wracking not knowing what city we are going to be living in. As of February 19, we will technically be homeless. While that is something familiar for me, our pets have always had a home. A very comfortable one at that. I’m sure these past few weeks have been very stressful for them with us gone and them being bounced around to accommodate the realtors. Things aren’t bound to get easier for a while. It may be hotels or friends’ homes until we have a clear idea where we will be.

As of yesterday, the assumption is that Guadalajara may be where we end up. I’m not sure how I feel about that, as it is a city of over 6 million people. I haven’t lived in a city that big for 30 years. We will just have to see. I’m still hoping for Querétaro, although it is seeming less likely. Stay tuned.

Turns out that Lyn and I are lucky enough not to have to go back to teaching at the private grammar school next week. In fact, we are both teaching at VIA, the school where we are taking our TEFL course. I have a group that meets at 8:00 a.m. A-1 learners (beginner English language learners), and Lyn has A-2. We know the instructors as we have observed them teaching on several occasions. Plus we see them every day! I’m actually looking forward to working with students who are there because they want to be there. I will be teaching “will” and “going to.” Sounds easy, but it isn’t.

One of the many things I have learned during the class is that, as English speakers, we typically abuse our language. We speak it without thinking about it. As a result, we diminish our language by ignoring some of its subtleties to the extent that they no longer have meaning. Yet, when people from other countries learn our language, they learn to express it the way it was intended. It is a far richer language than most of us know. In short, this has been quite a humbling experience that has given me a greater appreciation for a language I have come to take for granted.

Big question. I don’t know at this point. There are so many things to consider. For now, I have to just take things one step at a time. Anything else is overwhelming for me. Hopefully, at some point over this weekend, I can fill in the gaps for you of the many experiences we have had. There are many that I have overlooked because I am so consumed with the class and its activities. We actually have done a few other things!

This site uses Akismet to reduce spam. Learn how your comment data is processed.